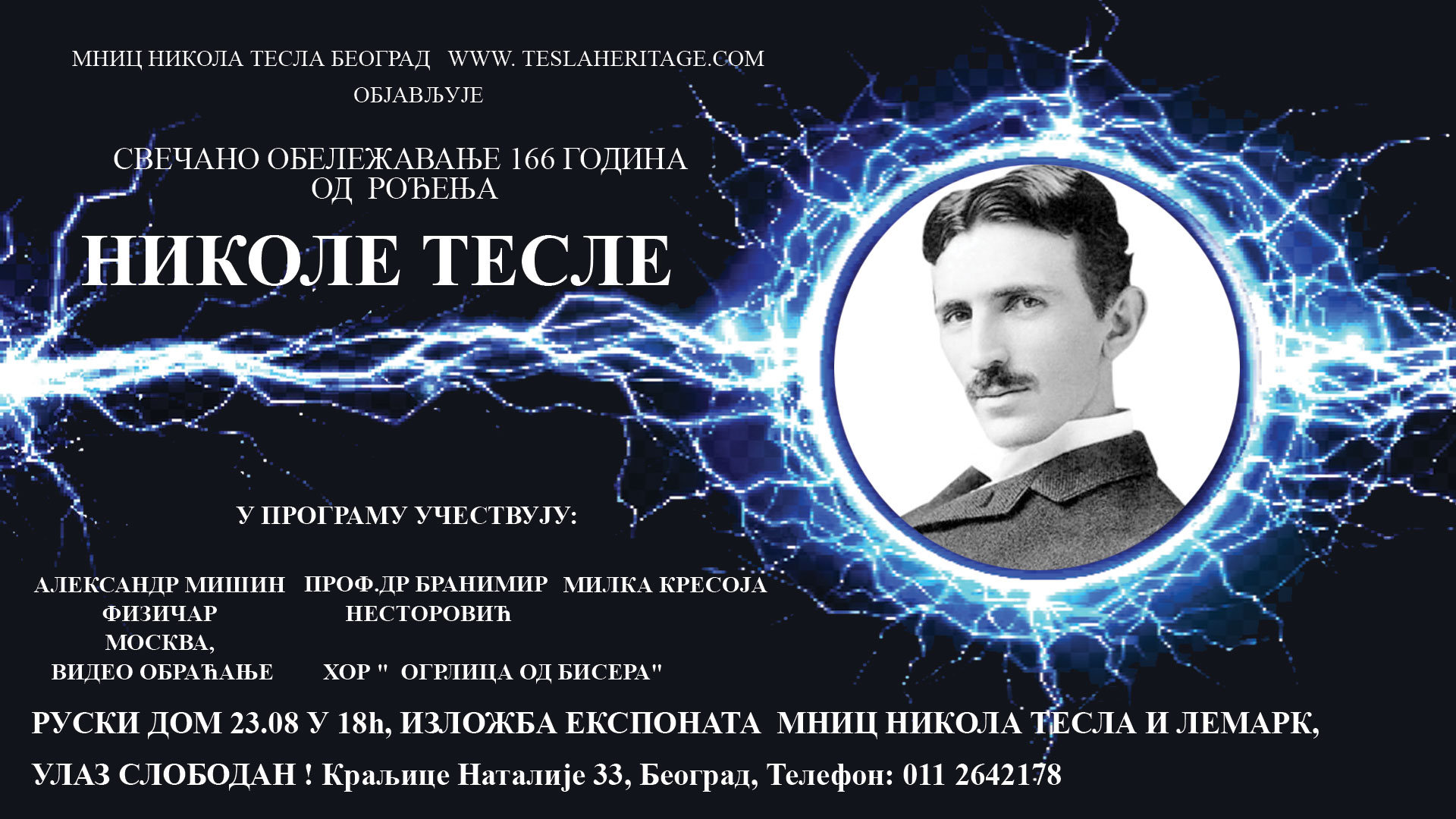 Presentation of Eukatherine Gariaev to Nobel Prize on Medicine of 2021

This paper is a presentation of Eukatherine Gariaev, Moscow, Russia, to Nobel Prize on Medicine of 2021.

Mrs Gariaev is a widow of Prof. Piotr Gariaev, the member of NY Academy of Sciences. They both were co-explorers, who together disclosed the wave features of the human genome. These features are being realized in the area of high energy, including also laser radiation.

Their experiments with He-Ne-laser confirmed such brave hypothesis Specifically, the mentioned wave features are being induced about sub-light speeds, in flow of radiation. Such phenomenon fully confirms still fantastic assumptions about teleportation effect, ignoring any temporary intervals.

Meanwhile, such an effect is already being applied by DARPA, which produces time travels since 1970, without any theoretical rationale, nevertheless. Only Katya and Piotr Gariaev achieved experimental evidence of this essence.Current mathematic model there uses wave function as below.

Genome essence can be described by the quantum statistics, because it exhibits to be quantized. Indisputably, an elementary particle of the genome has also the primary mass marked m. Its states can be displayed by the wave function viewed in the form Ψ = Ψ(x,y,z) in 3-dimension space. Then I can write Schrödinger equation in its original form, such as:

including i as imaginary number being sqrt{-1}, Ψ is presented as the wave function, Δ is Laplacian and U is the potential energy generated by a point source; U = U(r).

Our example is for a spherical wave Ψ = Ψ(x,y,z) as above. However, this situation should be solved for a composition of atoms, which one is also the combination of the elementary particles. Thus, this equation is being transformed into:

where h is Planck constant.

In this way, it’s important to calculate a value of own energy of the elementary quantum. Usually, this is Einstein formula as E = h*v where v is a wave frequency. Because of v=1/λ, where λ is the wave length, then we are coming to E = h/λ

Picture below visually shows the quantum state of the genome in the form of a traveling wave in the Dirac vacuum model. Exactly Dirac model became a key for Katya and Piotr Gariaev to open the door to a new field of Knowledge

Fig. 1 An analog of the human genome quantum state in the form of a traveling wave in the Dirac vacuum model

Generally, the shown wave function is not so important to be studied. Practical application has the square of its module, or |Ψij|*|Ψij|, giving the opportunity to determine its spatial dislocation with enough high degree of probability. This is needed to debug the capability of transfers, as the function of the physical distance.

General traveling wave is the aggregate of elementary waves being in fact the wave package, as this is seen from the equation [3] herein. Nonetheless, its transfer is being produced under the principle next-beyond-first, so this transfer is going to evacuate the elementary particles that assembling is in the point of attack. And then we are coming to the idea of teleportation, which had been developed by Nikola Tesla.

Such idea was opened above, however such estimation the consequence of the concept of space multiplicity put by Mr Beressnev into the scientific practice on the analytical basis, which imagines our world as a superposition of different metrices being fields composition. Gariaevs theory only confirms such a hypothesis, because the human genome is also the composition of different metrices induced in the form of the wave package and consequently any organism is a spawn of field basis.

Oh, this is really to change our materialistic imaginations,coming to the solipsistic philosophy by Mach, which leads us to the world as a sensual complex. By the way, exactly this hybridization made Henri Poincare to be the factual father of Relativity Theory, applying the relativist dynamics to the description of the features of spatial&temporary continuum. These Poincare’s results became the ground of the theory of the wave genome by Katya and Piotr Gariaev that’s fully proven on the experimental basis.

Moreover, Gariaevs theory proves the concept of God, at that indisputably. Their layouts unconditionally approved an essence of torsion fields carrying a constructive information.These thoughts and results are fully compatible with the svelte theory by Paul Dirac, who assured that “Nature has the fundamental peculiarity that the most basic physical laws are described by a mathematical theory, the apparatus of which has extraordinary power and beauty. We should just take it for granted. The situation could probably be described by saying that God is a mathematician of very high rank, and that he used top-level mathematics in constructing the Universe.”

Such words of Paul Dirac about God demonstrate that he surely suspected the existence of absolute Nothing. He didn’t decide to call it as God, however, though he was sure in rightness of Sixth Proof by Immanuel Kant. Nevertheless, later explorations identified this Nothing as the sole generator of said torsion fields and such a personification gives a right to imagine this Nothing like the World Mind utilitarily personalized as God.

Our freedom is just a part of our Being, but the main part. Consequently, we are not limited in our deeds and this is that we only are the envoys in our world, because this world is based on the Causal Law.

Thus, the explorations of Katya & Piotr Gariaev really prove the estimations of preceding genius minds about the essence of our world. Unfortunately, Mr Gariaev left this beautiful world last year. Hence, we request your Committee to reward Mrs Eukatherine Gariaev, Moscow, Russia, by Nobel Prize on Medicine of 2021. 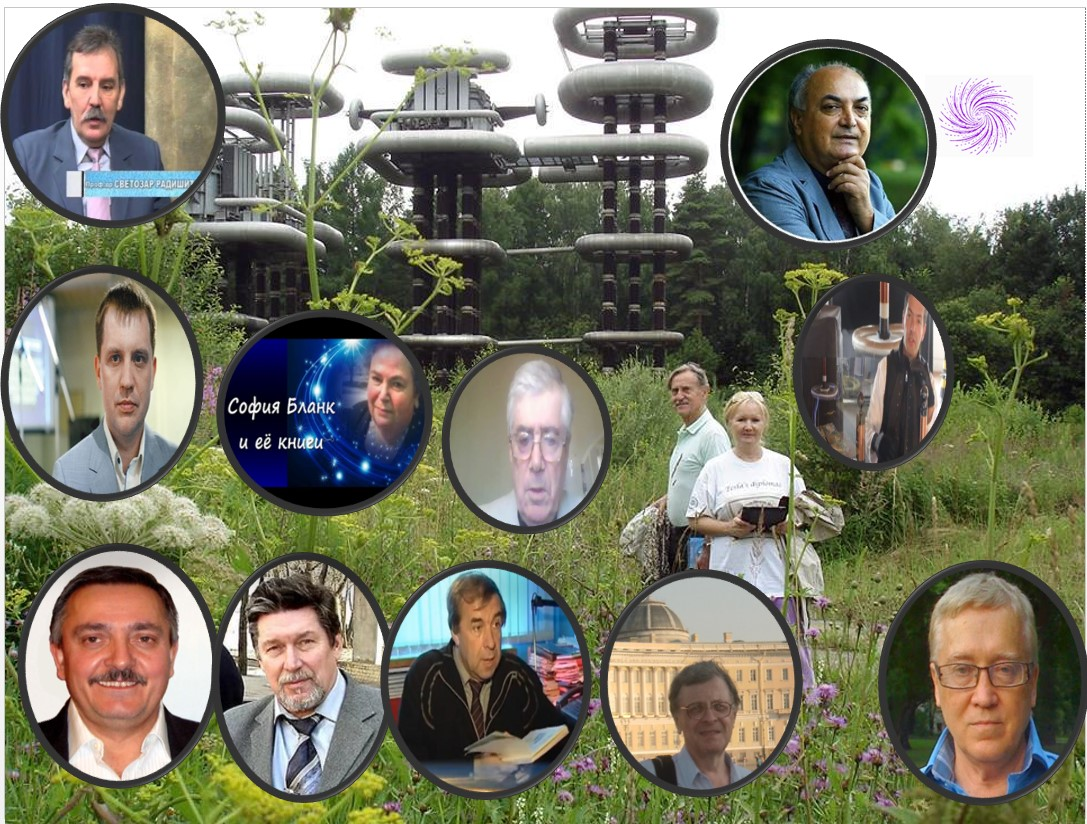 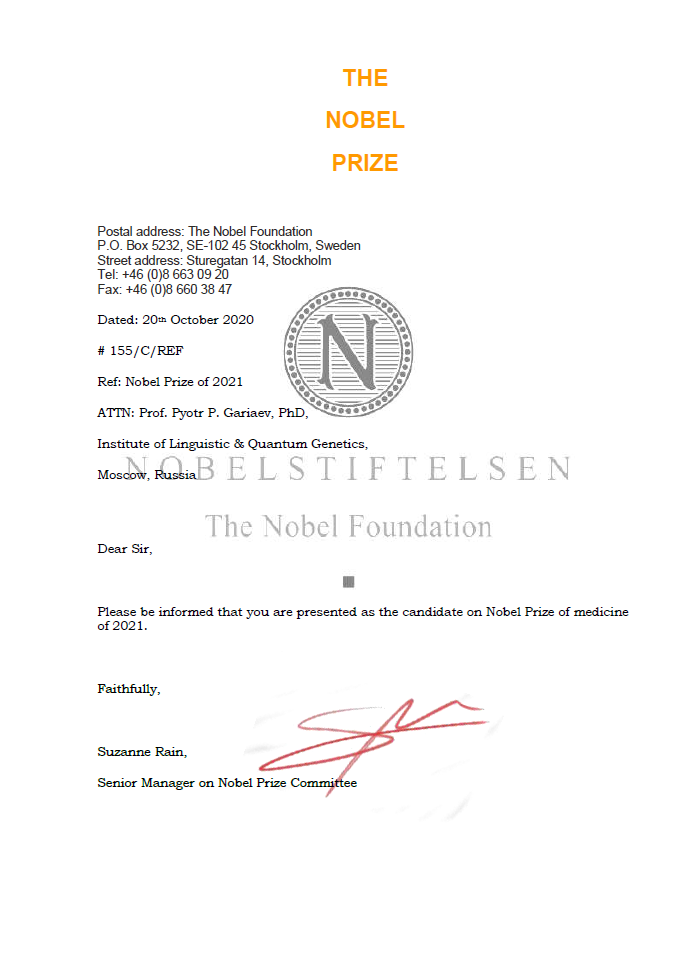 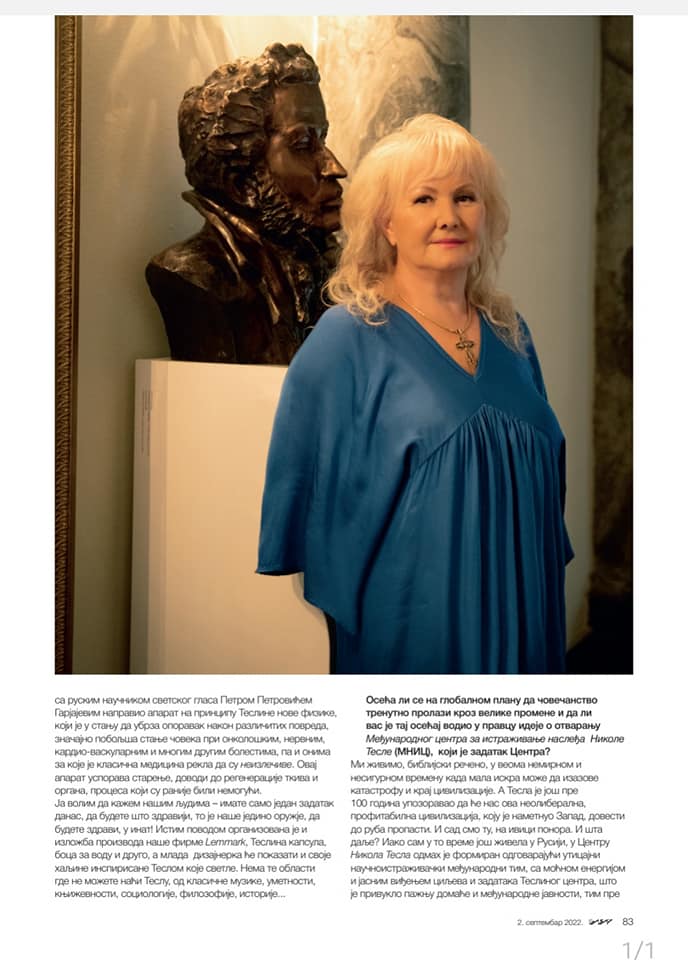 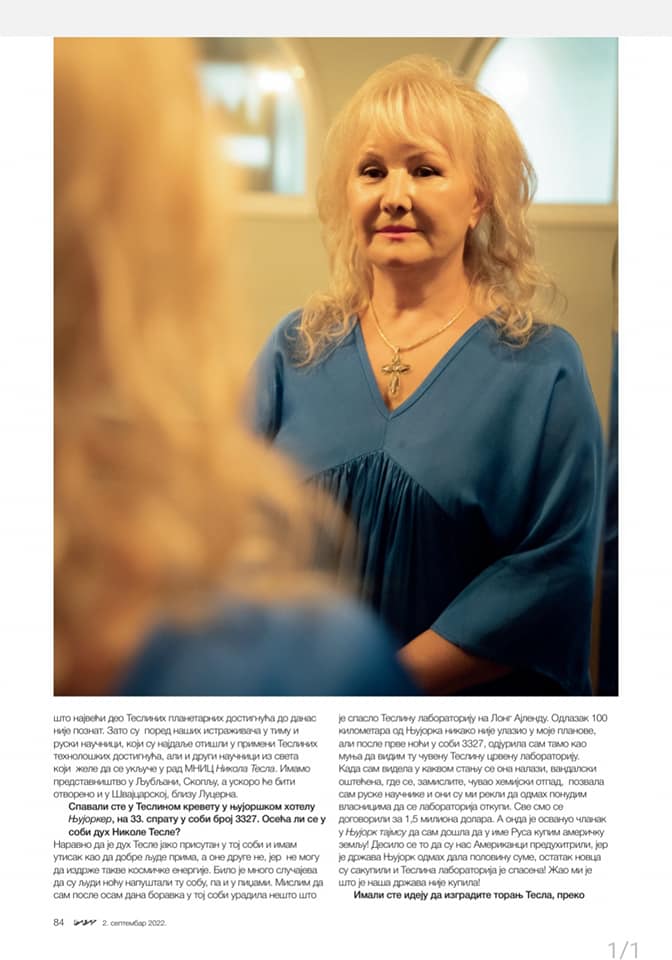